You are full of redox reactions. The redox reaction respiration releases the energy you need to live, and the food you eat ultimately comes from the redox reaction photosynthesis. Around you, mobile and laptop batteries work using redox reactions, as do fuel cells, bleaches, old fashioned wet photography, and metal corrosion, such as rusting iron.

So what are redox reactions?

An example of redox is when the metal sodium, reacts with the green gas chlorine and then the white solid sodium chloride is made.

The sodium has been oxidised and the chlorine has been reduced.

You may wonder why the word reduction is used to mean a gain of electrons. Thousands of years ago it was noticed that the metal made by smelting had less mass than the original ore. The ore was made smaller, reduced. The loss of oxygen made the mass less. More recently it was realised that the metal atoms were gaining electrons.

Oxidation used to mean just ‘gain of oxygen’, but it was realized, more importantly, that the other chemical was losing electrons to the oxygen. So it was decided that ‘oxidation’ should have the broader meaning ‘loss of electrons’.

To allow trains to travel at high speeds the rails must be welded together so there are no gaps. This must be done in isolated places so molten iron is made using the thermite reaction:

The aluminium powder, Al, is oxidized to aluminium oxide, Al2O3:

The aluminium is the reducing agent 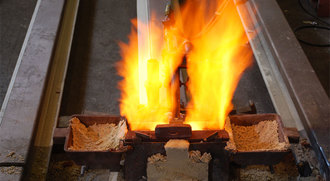 What are half-equations? Half equations show the gain or loss of electrons by one chemical. For example, this is the full equation for when sodium reacts with chlorine:

Each sodium atom is losing an electron to a chlorine atom (it is being oxidised), so you could write this half equation:

Each chlorine atom in a chlorine molecule gains an electron (it is being reduced), so you could write this half equation:

(You need to show two chloride ions because each chlorine molecule, Cl2, contains two chlorine atoms.) The way sodium reacts does not depend on the other reactant. For example, if sodium reacted with bromine instead of chlorine the equation would be:

Sodium is still gaining electrons in the same way; and the half equation for bromine becomes:

What we have been writing here are known as half equations, but this only shows half the story, either the gain or the loss of electrons. For a full equation we would need to put two halves together (which we will see in a while).

Be aware that some ions are spectator ions and they take no part in the reaction. When zinc is put into copper sulfate solution the full equation is:

Each zinc atom is oxidised:

Each copper ion is reduced:

Notice that the sulfate ions, SO42-, do not appear in the equations. They do not change during the reaction. They are dissolved in the water, so are just floating around. As they are said to only ‘watch’ the reaction they are called ‘spectator ions’.

What is an oxidation state?

An oxidation state is the number of electrons needed to be gained or lost to make a neutral atom. Using oxidation states is a way of working out how oxidized or reduced something is. It is similar to the charge on ions, except that it is also used for covalent compounds.

How to Work out Oxidation States

Use these rules to calculate oxidation state:

Here are some examples of common compounds with all the oxidation numbers:

How to combine two half-equations

The easiest way to combine two half-equations is to work in steps:

Step 1 Write out the two half-equations.

Step 3 Multiply up the reactants and products.

Step 4 Write all the reactants together, and the products together.

Step 5 The equation should now be balanced. In some of the more difficult examples you may need to add H+, OH- or H2O to one or both of the sides of the equation. This is best explained with an example later.

Our first example could be balanced in the traditional way, but for the purpose of this topic I will show it being balanced using oxidation states and redox.

By looking at the oxidation states of each atom, you can see that Fe has been reduced from +2 to 0 and Na has been oxidised from 0 to +1.

Step 2: Now we can write the two half equations:

Step 3: Now we need to balance the two half equations:

The sodium half equation originally only had one electron, for it to equal the iron half equation we needed to multiply it by two.

Step 4: Now everything is balanced lets reinsert it into the full equation, complete with balancing numbers but while also cancelled out the electrons (because there is two on either side).

(Note: because there was already Na2 in the equation there was no need to multiply that by two.)

As you can see the equation is now balanced! As mentioned earlier there was no need to use this method for that question, but if we try this one you can see how it is useful.

By looking at the oxidation states of each atom, you can see that I has been reduced from 0 to -1 and S has been oxidised from -2 to +6.

Step 2: Now we can write the two half equations:

Step 3: Now we need to balance the two half equations:

The iodine half equation originally only had one electron, for it to equal the sulfur half equation we needed to multiply it by eight.

Step 4: Now everything is balanced lets reinsert it into the full equation, complete with balancing numbers but while also cancelled out the electrons (because there is two on either side).

(Note: In the original equation it was I2 so because we had 8I atoms, that is the same as 4I2)

You can see that the charges are NOT balanced and for it to be a balanced equation they need to. To balance the charges we can either add H+ or OH- depending on the conditions the reaction was completed in. For A-level chemistry 99% of the time it is in acidic conditions and hence you need to add H+. The only time I would use OH- is if that species was already in the reaction or you are explicitly told to.

So by adding H+ to the right hand side, this give us:

(Note: I have added 8 because I need both sides to have the same charge, so now they both equal -2)

The only thing we can add now is water. Just ensure that when adding the water the hydrogen balance and then if you have completed the previous steps you will hopefully find a fully balanced redox equation:

If this is the first time you have done this, this will probably look very difficult and long, but once you get the hang of it, it doesn’t take too long.