The energy needed to remove an electron from the outer shell of an atom is called the ionisation energy. This is different for all atoms and can be measured. The definition you need to know is:

You can write equations for this process:

There are a few factors that will affect the energy needed to remove the electron.

The value for helium is higher than that for hydrogen because there are now two protons in the nucleus. The nuclear charge is greater so the pull on the outer electrons is larger. More energy will be needed to pull an electron out of the atom.

Lithium atoms have three protons so you would expect the pull on electrons to be greater. However, the 1st Ionisation Energy of lithium is lower than that of helium because:

In many cases you will want to remove more than one electron. This is where the second ionisation energy comes in. This is the energy needed to remove a mole of electrons from a mole of ions in a gaseous state.

As you can see, the oxygen ion had a +1 charge and now it has had one more electron removed from it, it becomes a 2+ ion. The same factors affect the amount of energy needed but you will notice that second ionisation energies are much larger than first because you are trying to remove an electron from an ion that is already positive, this means that the electron is now even more attracted to the nucleus.

We can measure the energies required to remove the electrons one by one from an atom, starting from the outer electrons and working inwards.

Here is a plot of the successive ionisation of sodium:

Trends in Ionisation Energies across a period

Ionisation energies generally increase across periods. This is because there is an increase in nuclear charge making it more difficult to remove an electron.

If you plot a graph of these values it shows that the increase is not regular. 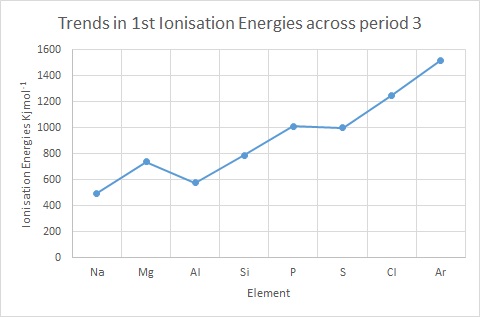 Look closely at how there is a drop in energy between Magnesium and Aluminium, even though the nuclear charge increases. This is because the outer electron on the Al is now in the 3p orbital which is slightly higher in energy than the 3s, this means it is further away from the nucleus and therefore easier to remove. There is also slightly more shielding (from the 3s) making it even easier to remove.

Now look at the small drop in ionisation energies between Phosphorus and Sulfur. This is because in Phosphorus the electrons are singly occupied ( px, py, pz), but in Sulfur the one of the p orbitals has two electrons in it , and these repel each other, this means it is easier to remove one than expected. All of these things give VERY strong evidence to show the electronic structure model is indeed correct!

Trends in Ionisation Energies down a group

The trend in ionisation energies down groups is a general decrease. Even though as you go down the group the nuclear charge increases, the electrons are getting further away from the nucleus. Couple this with the shielding effect this causes it to need less energy to remove. 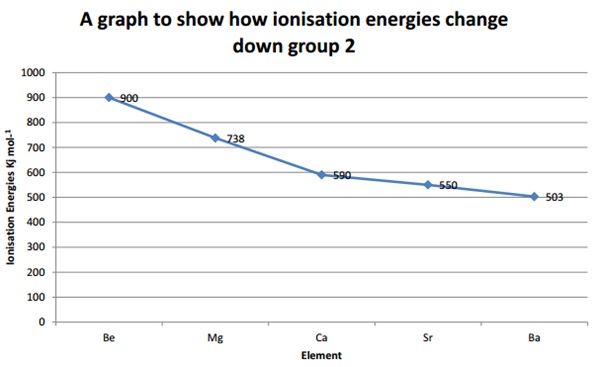