The group 7 elements are called the ‘halogens’ because they make salts such as the common salt, sodium chloride, that you put on your food. ‘Halo’ is Greek for ‘salt’ and ‘gen’ means ‘make’, as in the word ‘generate’. This makes the ‘halo-gens’ the ‘salt-makers’. They are in many soluble salts, are all commonly found in sea salt, and we need them to live.

The halogens appear very different from each other. They have different colours and may be solids, liquids, or gases. 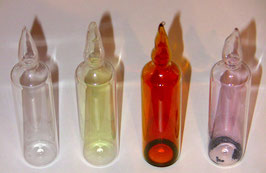 The many colours of iodine

You may see pure iodine as a black solid, but you can make it change colour.

Have you ever tested for starch using iodine? If you have, then you will know that iodine turns blue-black with starch.

The trends in boiling points down group 7

You can see from the photographs above that the halogens at the top of the periodic table are gases, bromine in the middle is a liquid, and at the bottom is solid iodine. So as you go down group 7 the halogen boiling point increases. We can explain this. 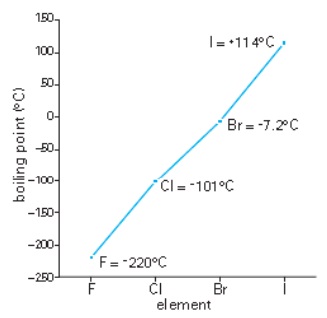 Electronegativity and the hydrogen halides

All the halogens react with hydrogen to make covalent hydrogen compounds called the hydrogen halides. It is likely you have met at least one, hydrogen chloride, before. The fluorine atom is the most electronegative halogen atom, so in hydrogen fluoride the electron density in the covalent bond is strongly attracted towards the fluorine atom. Hydrogen fluoride is strongly polar. An iodine atom has the same electronegativity as a hydrogen atom. Hydrogen iodide is almost non-polar. 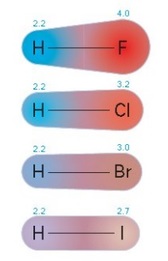 All halogens gain electrons to make halide ions, so all the halogens are oxidising agents. You need to know the trend in the oxidising power as you go down group 7.

When a halide ion loses an electron then a halogen atom is made. For example:

This change is oxidation. The halide ion is an electron donor, so is a reducing agent.

When green chlorine gas is mixed with aqueous potassium bromide then each chlorine atom gains an electron from a bromide ion, leaving orange-brown bromine. The chlorine atoms accept the electrons:

As chlorine is a stronger oxidising agent than bromine, it removes the electron from the bromide ion. A redox reaction in which one halogen replaces another is called a displacement reaction.

What happens when bromine is mixed with chloride ions, will there be a reaction? Chlorine is the stronger oxidising agent, so the chloride ions keep the electrons. A bromine atom is not sufficiently oxidising to pull an electron away from a chloride ion.

You already know how halogens can oxidise halide ions to give other halogens. For example, iodide ions lose electrons to give iodine atoms, which join to make iodine molecules:

The trend in reducing power

As you go down group 7 the halide ion become strong reducing agents. This is because:

Sulfuric acid reacts differently with different halide ions. We will look at their reactions starting from the top of the group.

A fluoride ion is a very weak reducing agent. This is not surprising as fluorine is very reactive, and so gains electrons very easily to make fluoride ions. To reverse this reaction would be difficult. The reaction of fluoride ions, in solid sodium fluoride, with concentrated sulfuric acid is not a redox reaction. It is an acid-base reaction:

A chloride ion is also a very weak reducing agent, so it reacts in a similar way to fluoride ions. Solid sodium chloride reacts with concentrated sulfuric acid like this:

In this reaction, and the fluoride ion reaction above, a hydrogen ion (H+) has been lost from the sulfuric acid and joined with the halide ion. The sodium ion is just a spectator to the reaction.

Bromide ions start off reacting in a similar way to chloride ions, so some misty HBr fumes may be seen:

However bromide ions in the hydrogen bromide are quite strong reducing agents, so they reduce the sulfuric acid and are oxidized to red-brown bromine:

This is a redox reaction as there is a change in oxidation states:

The bromine has been oxidised from an oxidation state of -1 to 0.

An iodide ion is so large that it loses an electron easily, so it is an electron donor and therefore a strong reducing agent. It is so strong that it will reduce sulfuric acid to hydrogen sulphide. Firstly it starts off similar to the others:

As mentioned though HI will firstly reduce the sulfuric acid to sulfur dioxide:

Then the sulfur dioxide is reduced to hydrogen sulfide:

Both the second and third equations are shown again here, but this time with oxidation states:

The iodine has been oxidised from an oxidation state of -1 to 0.

(Note: As before, each hydrogen atom is in a +1 oxidation state, but in both H2S and H2O they appear as +2 because there are two atoms. The same applied to oxygen in SO2.)

The sulfur has been reduced further from an oxidation state of +4 to -2.

The iodine has again been oxidised from an oxidation state of -1 to 0.

To test for halide ions you need to add some silver nitrate solution. If halide ions are present you will get distinctive coloured precipitates.

Firstly you should add some dilute nitric acid which helps remove any other ions that may interfere with the test. Then you add a few drops of your silver nitrate. If halides are there you will produce a silver halide:

Silver nitrate is a white precipitate, silver bromide is a cream precipitate and silver iodide is a yellow precipitate.

Sometimes it is difficult to tell them apart, especially if you do not have the full set, so we can use a solution of ammonia to help us:

If you mix chlorine gas with cold and dilute sodium hydroxide (at room temperature) you bleach. Bleach has the formula NaClO(aq).

This is an example of a disproportionation reaction. This is when the same element (in this case chlorine) is both oxidised AND reduced.

A similar thing happens when you mix chlorine in water:

The ClO- ion is known as a chlorate(I) ion. This is again a disproportionation reaction because the Chlorine atom has been both oxidised and reduced, from zero to +1 and -1 respectively.

In sunlight chlorine can also decompose water to from chloride ions and oxygen:

In many countries chlorine is added to the drinking water in small amounts to kill off bacteria and other disease causing microorganisms as well as staying in the water to prevent reinfection later on. It also stops the growth of algae, eliminated bad tastes and smells and removes discolouration. Most people agree this is a good thing but there are some issues. Firstly, the wrong amount of chlorine could cause it to become toxic. If the gas is breathed in it can cause respiratory problems, chemical burns and can be fatal. It can also react with a variety of organic compounds to form chlorinate hydrocarbons and many of these are classed as carcinogenic (cancer causing).

Finally this is an example of mass medication, where this has been added to your water supply without consent, and it is not something you can opt out of. When adding chemicals to the water supply we need to weigh up the risks and benefits.