These processes involve energy exchanges between the reacting system and its surroundings.

Enthalpy is the term used to describe the heat (energy) content of a system. It has the symbol H and is measured in kilojoules. It is only really possible to measure enthalpy changes (delta H, written as ΔH). This can be calculated from measured changes in temperature. Enthalpy change is defined as:

The heat energy change measured under conditions of constant pressure.

This is the enthalpy change when one mole of a compound is formed from its elements in their standard states under standard conditions (298K and 100 kPa). For example, when producing magnesium oxide the standard enthalpy of formation is:

This is the enthalpy change when one mole of a substance is completely burned in oxygen under standard conditions (100 kPa and 298 K). For example the standard enthalpy of combustion of ethane is:

Calculating the Enthalpy of Reaction

The heat energy change for any reaction can be calculated using the relationship below:

Where q is the heat energy, m is the mass of substance, c is the specific heat capacity and ΔT is the change in temperature. 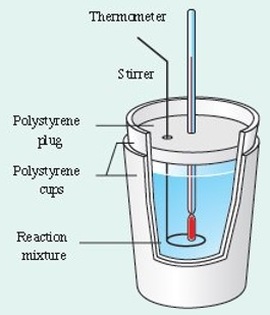 Two expanded polystyrene cups are placed on inside the other and a wire stirrer is used to ensure thorough mixing. We make the assumption that we have negligible heat loss and that all of the heat exchanged in the reaction is used to alter the temperature of the water. 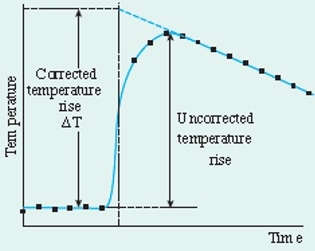 For a reaction carried out in a simple calorimeter if it is assumed that heat loss in the experiment is constant then an accurate figure for the maximum temperature change can be obtained by extrapolation of the graph. Theoretically the maximum temperature should be almost instantaneously after the reactants are mixed, but in real life it takes time for this heat to move through the solution and then affect the thermometer, this extrapolation graph helps negate this problem.

Question on this topic usually revolve around the mathematical application of q=mcΔT. Here is an example question:

A known mass of solid is totally dissolved in a large excess of water whose mass is known. The change in temperature of the water is measured.

In an experiment using a simple calorimeter, 8.00g of ammonium nitrate (NH4NO3) was dissolved in 50.0g of water. The temperature fell by 10.1oC. Calculate the enthalpy change for this process. (The specific heat capacity of water is 4.18JK-1g-1. The heat capacity of the container can be ignored.)

Step 1: Calculate the heat change from the change in temperature using

Step 3: Calculate the enthalpy change per mole of ammonium nitrate

Step 4: Answers are usually given in kJ mol-1

The answer should be positive as the temperature decreased! If this was a temperature increase then the enthalpy would be negative.