Electronegativity is a measure of the ability of an atom to attract a bonding pair of electrons and the values usually given from the Pauling scale (for A-level anyways). Fluorine, which is the most electronegative atom, is given a value of 4.0, and values go all the way down to caesium and francium which are the least electronegative at 0.7. However you must but be aware that the values are all relative, so a difference of 0.5 between 3.5-3.0 is not the same as a difference of 0.5 between 2.5 – 2.0.

If we take a carbon – carbon bond:

The line represents the covalent bond and the dots the lone pair of electrons. This is an average pictures because the electrons are always moving but “on average” the electron pair would be found within middle of the covalent bond because carbon atoms both have the same electronegativity values and this is therefore a non-polar bond. 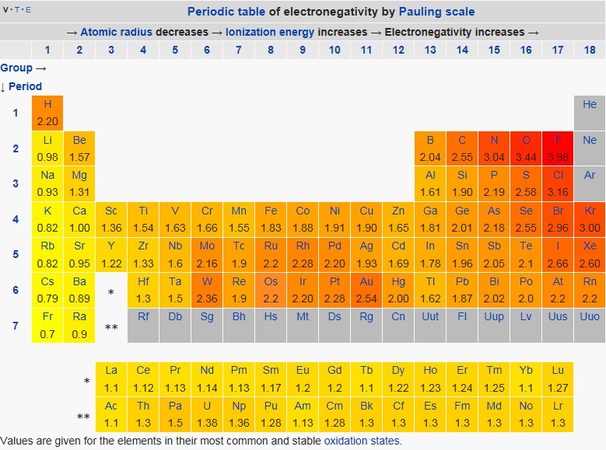 As you can see this means that the electron pair in the covalent bond is (on average) much closer to the fluorine atom compared to the carbon atom. This is a polar bond. To show that a bond is polar we can add delta charges. If the electron is much closer to one of the atoms then it will be given a delta negative charge and if it is further away it is given a delta positive charge. The delta symbol is □.

You can explain the idea of electronegativity with dot and cross diagrams and a concept called effective nuclear charge.

Both carbon and fluorine are in period two, so this means they both have a full inner orbital with two electrons. The carbon atom has six protons in the nucleus and the fluorine atoms has nine. There are two electrons (in the 1s orbital) on both carbon and fluorine “shielding” the outer electrons from the full force of the nucleus and due to both atoms being approximately the same size (both period two) then it is this shielding affect and proton difference that is causing the electronegativity difference.

This method is a good way at looking at why the electronegativity increases across a period, but what about down a group? Why is chlorine NOT as electronegative as Fluorine? Well this is a bit simpler, the outer electrons are further away from the nucleus! If you work out the effective nuclear charge of both fluorine and chlorine, then you will find they are both +7:

Shielding electrons, in this case 1s = 2 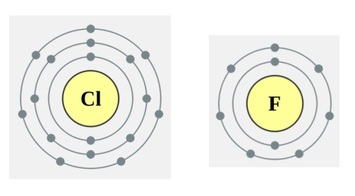 You can also clearly see that the outer electrons on chlorine are further away from the nucleus, which means they experience less pull and hence its electronegativity value is lower.

I have spoken about electronegativity and mentioned polar bonds. To be precise a polar bond is a bond with an uneven distribution of charge which means that if the bond has an electronegativity difference then the bond is also polar. However just because a molecule has a polar bond, does NOT mean it is a polar molecule (confusing huh?). It is all in the description “uneven distribution of charge”. Take chloromethane:

The carbon – chlorine bond is polar because of the electronegativity difference between the two atoms. This is ALSO a polar molecule.

The carbon – chlorine bonds are all polar because of the electronegativity difference between the two atoms BUT this is NOT a polar molecule. Because all of the four bonds are polar there is now not an uneven distribution of charge across the molecule, and it is therefore not polar.

An easy way of determining if a molecule is polar (liquids only) is to take a charged polythene rod and pour a stream of the liquid. If it is polar then the liquid stream will bend, if it is non polar it will not. You can try this with water (which is a polar molecule) and it will bend, however a molecule such as cyclohexane does not.