Currently the world’s main source of organic chemicals, it was produced over millions of years by the breakdown of plant and animal remains at high pressure and temperatures deep below the sea. Because it was made so long ago it is known as a fossil fuel and is not renewable.

Crude oil is a mixture mostly of alkanes, both unbranched and branched. Crude oils from different sources have different compositions. It also small amounts of other compounds and some of these contain sulfur. These produce sulfur dioxide, SO2, when they are burned. This is one of the causes of acid rain as it reacts with oxygen and water in the atmosphere to form sulfuric acid.

To convert crude oil into useful products we must separate this mixture. We can do this by heating and then collecting the fractions. This can be done because each of the fractions have a different boiling point. 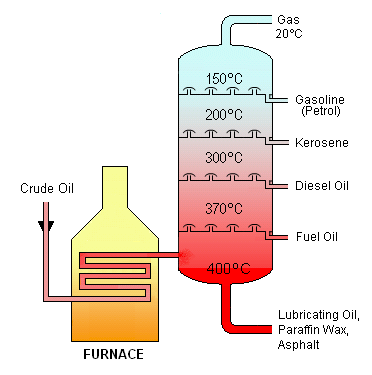 Cracking is needed because when fractional distillation of crude oil occurs, you get a very high percentage of long chain hydrocarbons. So the results of cracking are:

There are two main types of cracking:

This reaction involves heating alkanes to a high temperature, under high pressure. Carbon-carbon bonds break homolytically and two shorter chain are produced each ending in an unpaired electron. As there are not enough hydrogens to produce two alkanes, one of the new chains must have a carbon-carbon double bond.

In thermal cracking, any number of carbon-carbon bonds can break, and anywhere on the chain.

This kind of cracking takes place at a much lower temperature (approx. 800K) and uses a zeolite catalyst which consists of silicon dioxide and aluminium oxide. Zeolites, as well as being acidic, have a honeycomb structure which has an enormous surface area. This form of cracking is used to produce hydrocarbons such as motor fuels and aromatic compounds.

The products of catalytic cracking are mainly gases, which means chain lengths of less than five. The mixture also decolourises bromine showing that it contains alkenes as well. A number of other processes are carried out on the products of fractional distillation and cracking, which aim to improve the quality of the products, such as motor fuels.

To produce branched chain alkanes you heat the straight chains under pressure with a platinum catalyst.

In reformation we heat straight chain alkanes under pressure with a catalyst of platinum and aluminium, this removes hydrogen in steps ultimately ending up with cyclic hydrocarbons (rings).

Crude oil and the Environment

All hydrocarbon fuels produce polluting products when they burn. These include:

As you are no doubt award, crude oil is a fossil fuel, meaning that it takes millions of years to be produced from plant and animal matter decay and hence cannot be renewed in the short term, so new alternatives source of energy must be found.

These are fuels that are obtained from fast growing plants so they are renewable. Some biofuels can be used as they are, for example straw or wood can be burnt directly. Other crops such as sugar or rape seed oil need chemical treatment to turn them into useable sources of energy.

Ethanol (CH3CH2OH), when made from the fermentation of sugar and other carbohydrates obtained from plants, is a biofuel. It burns in oxygen to form carbon dioxide and water.

Ethanol has an energy density of about 30 kJ per gram, significantly less than alkane fuels (around 50 kJ per gram). However, with some modifications, normal car engines can run on pure ethanol, or ethanol/petrol mixtures. This is quite prevalent in some countries and one of the benefits is that it reduces the need to import crude oil. Sadly, it does have one major drawback, and that is the need for huge areas of land to grow the correct crops to produce the ethanol. This often means either reducing the number of edible crops grown, or more often destroying forests and other areas of nature.