Electron shells have different amounts of energy. They can hold up to a maximum number of electrons given by the formula 2n2 so that the first energy level can hold two electrons, the second eight and the third eighteen. Each main energy level also has sub-levels.

The electron is quite an elusive species as it can act as both a particle or a wave. The sub levels are expressed in terms of “orbital clouds” and are mathematical expressions of the probability that an electron can be found in this area. This volume in space is known as the atomic orbital.

The orbitals of each main level have different shapes and therefore slightly different energies. There are four sub levels s, p, d and f but we will only concern ourselves with the first three.

Any single atomic orbital can hold a maximum of two electrons. The first orbital is the s orbital and its shape is simply a sphere, however there are three separate p orbitals labelled px, py and pz due to their orientation in space. 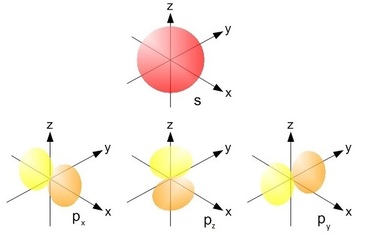 Two electrons in the same orbital have opposite spins and one way that this is represented is by arrows pointing up or down.

Atomic orbitals of lower energy are filled first according to the “Aufbau Principle”. As well as this, atomic orbitals of the same energy will fill singly before any pairing occurs this is due to electron repulsion and is known as the “Hund’s Rule”.

The first example here is showing a Fluorine atom. You can see that in total there are 9 electrons (which is also the atomic number of fluorine). Its electron configuration can therefore be written as 1s2 2s2 2p5. 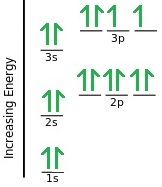 This example shows Sulfur. In total there are 16 electrons (which is also the atomic number of sulfur). It’s electron configuration can therefore be written as 1s2 2s2 2p6 3s2 3p4. 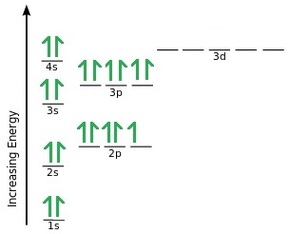 Once we get to the d orbitals there is a slightly anomaly to the filling up process. If we take a look at Calcium you can see its electron configuration is 1s2 2s2 2p6 3s2 3p6 4s2. You would be forgiven to think that the element would give you the configuration of 4p1 however this is where the d orbitals make their appearance. In fact, to confuse things even more, instead of it being 4d, it is in fact 3d!

Interestingly the 4s and 3d orbitals overlap somewhat, which means that when filling up with electrons you would fill up the 4s orbital first, and then the 3d. However, to add even more confusion, once filled if you were to remove the electrons one by one (ionisation) you would actually remove the 4s electrons before the 3d. Some examples should clear this up: 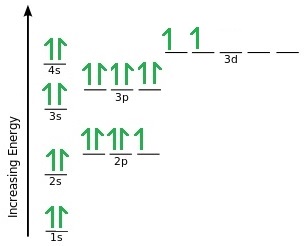 Now if we were to remove electrons from titanium one at a time, it follows the rule where those electrons in the highest energy sub shells would be removed first but once electrons are occupying a d subshell the energy levels drop below that of the 4s, so it would be the 4s electrons that would be removed first. This is one of the main reasons that transition metals have variable oxidation states as well as colourful compounds.