As you go down the group the atomic radius increases. This is because you are increasing the number electron orbitals.

Ionisation energies decrease down the group. This is because each element down group 2 has an extra electron shell, so the outer shell electrons are further away from the nucleus which ultimately means a reduced nuclear attraction (the attraction between the positive nucleus and negative electrons). As well as this reduced attraction we now have the inner shells shielding the outer electrons from the nuclear pull.

These two factors override the fact that atomic number (proton number) is increasing and as such it becomes easier to remove an electron as you go down the group. 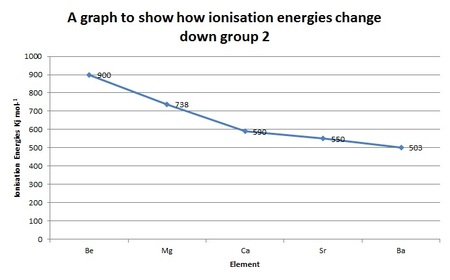 The reactivity of the group 2 elements increase as you go down the group. This is because, as explained previously, it is much easier to remove an outer shell electron as you go further down the group (lower ionisation energies).

Melting points generally decrease down the group this is because they are all metals and hence have metallic bonding which consists positive metal ions surrounded by a sea of delocalised electrons. As the atom gets larger there is now a smaller charge/volume ratio (they are becoming much larger (increase volume) but their charges remain the same (+2)) and the delocalised electrons are further away from the positive nucleus which means it takes much less energy to break this metallic bonding attraction.

If you look at the graph you can see there is a small anomaly for Magnesium, for A-level courses you are not expected to explain this deviation in the trend, and some text books mention a possible reason for this ‘blip’ is a change in the crystal structure. However on closer examination of the crystal packing for each of the group 2 elements, this is a poor explanation at best, and as such it is best left as an interesting property of group 2.

Group 2 elements all react with water in a similar way:

As you go down the group the reactions become more vigorous. This is because once again it is easier for the group 2 metal to be oxidised (lose an electron) because the outer shell electrons are further away from the nucleus and experience greater amounts of shielding.

Hydroxides: As you go down the group the solubilities of the group 2 hydroxides increase. Magnesium hydroxide is virtually insoluble, whereas barium hydroxide will readily dissolve in water.

Because of the insolubility of barium sulfate, and because barium is a heavy element capable of absorbing X-rays we can use it for a procedure known as a barium meal. The patient will ingest (or have an enema) a suspension of barium sulfate which will coat the tissues of the oesophagus, stomach and intestines as it passes through. The patient can then be given an X-ray where this soft tissue will show up as the X-rays are absorbed by the barium.

Barium ions are however very poisonous but because barium sulfate is insoluble, this means it is not digested, and passes harmlessly through your digestive system. 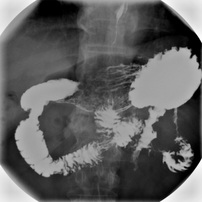 Magnesium is an integral part of extracting titanium from its ore (titanium (IV) oxide. This oxide is first converted into titanium chloride by heating it with carbon in a continuous stream of chlorine gas. It is the fractionally distilled to purify it and is then reduced using magnesium at high temperatures.

For the majority power plants, burning fossil fuels is still an important part of generating electricity. When these fossil fuels are burnt, contaminants of sulfur are reacted with oxygen to form sulfur dioxide which if released into the atmosphere can cause acid rain. This acid gas can however be removed from the flue gases using a group 2 alkali in a process known as wet scrubbing.

Calcium oxide (lime) and calcium carbonate (limestone) are both often used for this. A mixture of the calcium oxide or carbonate and water is created, known as a slurry and this is then sprayed onto the flue gases producing solid calcium sulphites which can then be removed.